Business trends has recently been on a shift in Zimbabwe and the economic issues have played a a major role in this.

Money changers has been on the increase lately despite being banned and even being given a penalty of upto 10years in prison. However, their resistance shows how profitable the business is and they have commited to fight the authorities.

Shortage of money in banks and the fact that Zimbabweans are nolonger banking money has also given them an upper hand.

Web Application Development involves the creation of apps and websites which resides in so called servers. Due to the continuous advancement of technology, this business has also been on the increase. Day to day businesses are now being run online and even payments are now digital. Apart from doing everyday business its now being used to advertise, which is also another business.

ZimTaxi/Vaya is also another business we can mention, Econet recently adopted the Uber concept whereby people can a hire taxi by just a click of a button, not only is it very convenient but its also a good business given the fact that one can just hire random taxis and pay them using commission, if that’s the case then one wont require much capital. 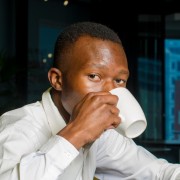 Civil Servants And Pensioners Can Use Their NOSTRO Cards At These Points: Zimswitch

Huawei To Drop Android For HarmonyOS In 2021